A friend and I recently took at weekend trip to Tuan Jie Zhen – a township that is about 30 kilometres outside Kunming. Bogi, a classmate from Hungary, and I stayed at the Heart 2 Heart Youth Hostel which is run by Heart to Heart Community Care.

Because there are very few social welfare benefits or resources for migrants, this organization works with these men, women, and families, in Kunming and the surrounding area. It helps them find housing and acquire skills for jobs, provides education to the children, and arranges health care for them. In addition to working with migrants, Heart to Heart Community Care sponsors cultural and educational activities and classes for the local community, with all profits from the hostel going to this organization. The hostel is located in Da He Village, on the outskirts Tuan Jie Zhen – a village-come-town that is sometimes referred to as an “urban village” and is mostly surrounded by farmland and forested hills.

My main purpose for the trip, besides getting away from Kunming for a couple of days, was to visit Rawdon Lau (who I met last year when I stayed at the Camellia Youth Hostel in Kunming). Rawdon heads the “Best of the Best” project which promotes cultural exchange, helps with environmental conservation on a grassroots level, and is socially active in local communities. Some time after my stay in March 2012, the Camellia Youth Hostel, and the hotel next door, were razed to the ground, falling victim to the rapid expansion and growth of urban China (the youth hostel was a stone’s throw from the Keats School, where I am currently studying Chinese, and I can see from my bedroom window the rubble that was left behind; nothing has been rebuilt since they tore the buildings down). Rawdon helped oversee the development of the Heart 2 Heart Youth Hostel and is now based there — when he is not shepherding other projects in China, returning to his home in Guandong Province, or travelling the world for work.

Bogi and I arrived in Tuan Jie Zhen close to suppertime that first afternoon so we took it easy and simply unwound from hectic Kunming. We ate bbq meat, fish, and vegetables and drank beer with the staff and one other hosteller. I enjoyed the stars for the first time in a while – something I hadn’t done since I was on my slow boat to China because the sky in Kunming is too polluted for them to be seen!

The next day, we headed out for a walk in the farmland near the forest of Woyunshan, and surrounded by other mountainous forests in the distance. We did not get very far since so much of our time was spent stopping to take photos. We happened upon a dozen or so black, tent-like structures which really piqued my interest.

There was a woman walking among the tents so I prodded Bogi (who speaks far better Chinese than I do) to ask her if we could take a look. It turned out that inside these tents is a mushroom growing business.  The next thing we knew we were being given a tour of this mycological enterprise.

“More than 800 varieties of edible mushroom grow in Yunnan,” said Zhou Yuankuang, secretary general of the Yunnan Mushroom Association, as he walked me through the workings of the local trade. “It is one of the most biodiverse places in the world.”

He explained that every day, between two and three in the morning, mushrooms arrive from all over the province. Large-scale dealers and exporters operate independently of the mushroom market, buying in quantity in county seats around Yunnan and taking the mushrooms back to Kunming or transporting them by airplane directly to other parts of China and to Japan, Italy, France, and the United States. Annually, mushroom exports earn dealers in Yunnan more than 650 million yuan ($100 million); sales to the rest of China bring in another 3 billion yuan ($450 million).

The man who gave us the tour oversees the business of growing what appeared to us to be porcini-like mushrooms. The following description of the mushroom farm is based on our understanding of his Chinese. Any inaccuracies are ours alone.

He told us that this part of Yunnan has the perfect climate for growing mushrooms because it is foggy, has dewy/moist mornings, and cool to warm temperatures. The area is a wide, fertile valley between forested mountains. Inside the tents, the temperature is kept at 27°C for growing and 17°C during harvesting/cropping. Each tent is made from black plastic tarp which helps keep the space warm, humid, and shady and each is used for a different phase of the mushroom growing cycle.

Our guide started the tour by showing us how the soil is prepared; it is a compost made from sawdust, wood shavings, nitrogen, gypsum, and older soil. It is all turned by hand, using pitchforks to aerate the soil, and is watered from time to time and covered with a plastic tarp to further promote decomposition. The compost develops as the raw ingredients are changed by the activity of microorganisms, heat, and chemical reactions.

The compost is then scooped and stuffed into, clear, oblong plastic (we are not actually certain of the composition of these bags) grow bags for mushroom cultivation; when filled they look like small logs.The filled bags are punctured and injected with mushroom spawn, laid one on top of the other on a bed of ash (to deter disease-like fungi and insects) and turned regularly to allow the air to circulate. It takes approximately 120 days for this spawn to take hold and grow in the bags. The bars are watered regularly and the relative humidity is kept high to minimize drying of the compost or the spawn. When they are ready, the mycelium (the vegetative part of the fungus) grows in multiple directions and the colour of the logs changes from brown to a yellowish-grey, pockmarked with white spots – fungus – throughout. These changes indicate that fusion has occurred. By paying close attention to the colours the mushroom farm employees can tell which log take has taken to the fungus injection; those that do not are re-injected.

After 120 days the grow bags are moved to another tent. The logs are removed from the bags and are leaned vertically against wires that are they strung horizontally between posts. They are then covered with plastic sheeting for a few more days, after which the farmers begin harvesting the mushrooms and can continue to do so multiple times over a six-month period. When this final process is complete the whole operation is repeated. 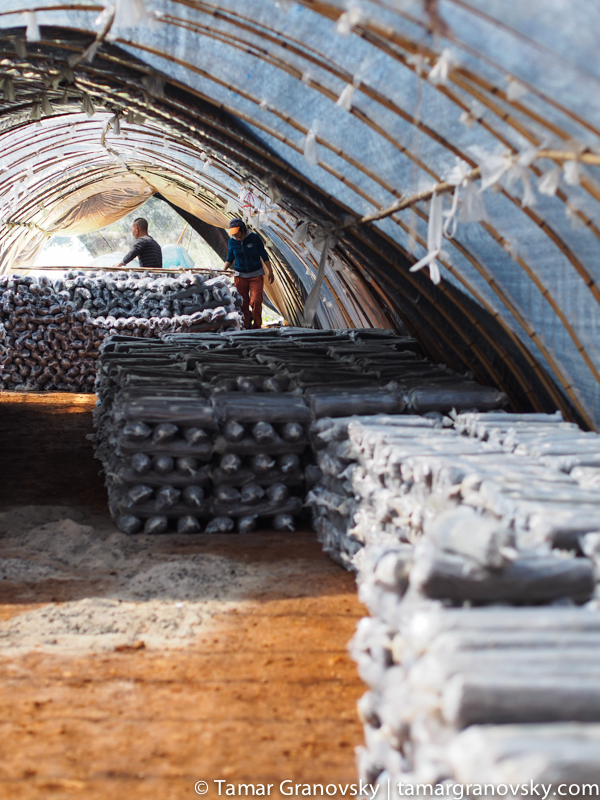 We were told that there are three qualities/sizes of mushrooms: small (just opened – the freshest and the most expensive), medium (more open and less expensive), and large  (the cheapest because they must be sold within a few days, before becoming too old and dehydrated). They sell these mushrooms in Yunnan and across China. However, the fungus-impregnated bars are also sold to mushroom growers in Japan, Korea, the U.S., and Europe. 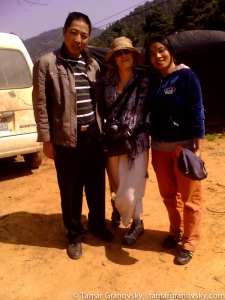 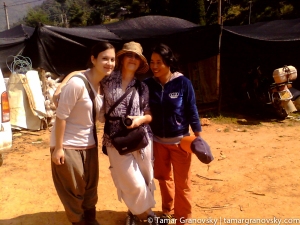 That afternoon Bogi and I met Rawdon for a large and delicious lunch;we ate soup, spring rolls, bitter melons with pork, a spicy tofu dish, and a very typical dish found throughout China: tomato and scrambled eggs. Among the options we were offered as ingredients for our dishes were eel, and honey combs with fresh grubs. We decided against them.

Lunch with Rawdon and Bogi

After our lunch together, the three of us walked to a mostly abandoned Le Ju Village just a few kilometres outside of Tuan Jie Zhen. The village is located on a hillside and its most recent architecture is 100-200 years old. However, the village actually dates back much further; it has been occupied for about 600 years. The people of this village were Yizu (Yi minority).

Many of the houses there are two stories high and all are constructed from bricks made from the iron-filled local soil. A number of the outer walls are, additionally,covered with a paste of red clay. Some bricks contained hay, bran, and corn which helps keep the walls strong.

The layout of each house is a square and surrounds a central outdoor courtyard. The kitchens and communal areas are on the bottom floor and the bedrooms and other communal areas on the top, and each home has an outhouse. A multi-generational family would live together and additions were built as needed, next door to the homes. Family members could freely come and go from one house to the other via a gate between the two side-by-side homes.

Today, when walking through the alleyways, one can see that the houses are covered in vegetation and the inside wooden stairs and floors are in the process of decaying. A few everyday items from the most recent generation remain in these homes as vestiges of the past. We noted a number of such items, including, pots, shoes, furniture, textiles, and even an unused coffin. It seems that only a few homes remain occupied. As Rawdon described the village to us Bogi and I could imagine what it might have been like there, not too long ago, despite its ghost-like emptiness today. 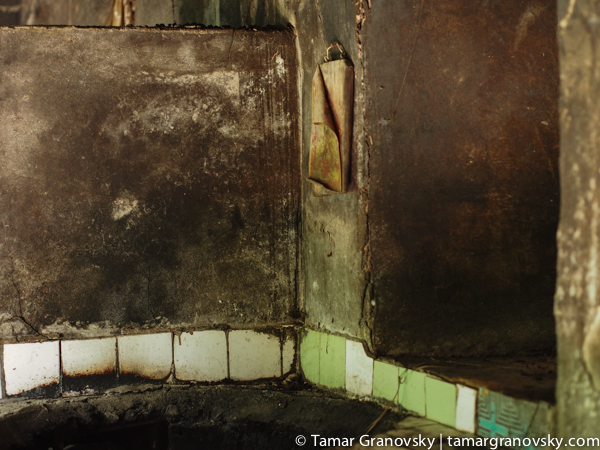 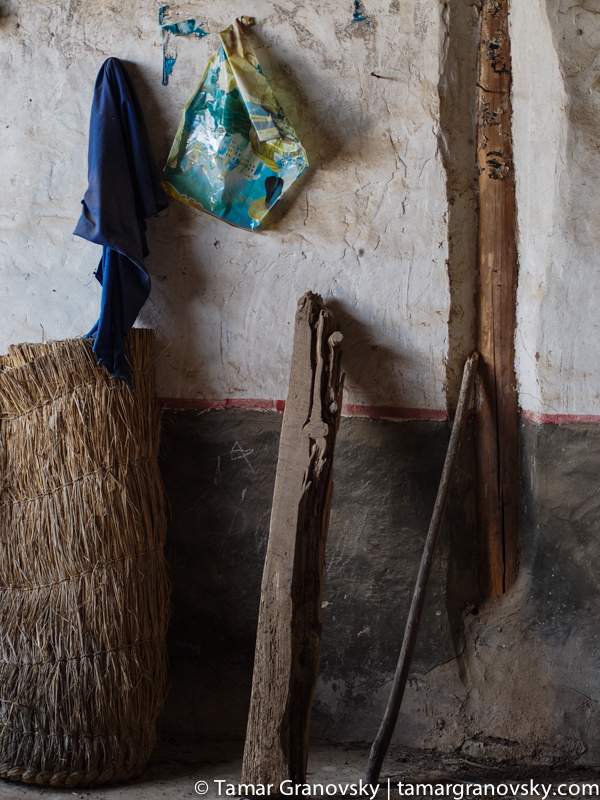 Finally, at the top of the village and hill, we reached a surprisingly large temple (for such a small community of homes) that still has a permanent caretaker. He unlocked the doors so that we could go in and give a little prayer and some offerings (candy, apples, money, etc. – to bring us luck), as well take photographs. At the bottom as well as the top of the stairs leading to the temple is a protected votive offering and incense area. At the entrance of the temple itself, people leave pine needles on the ground. We asked the caretaker about some of the traditions but his dialect was so localized it was impossible for us to understand his answers – even Rawdon had difficulty following him. What Rawdon did tell us is that there are women who still come to pray monthly at this temple. The temple is graced by a variety of religions. Both Buddha and the local “Earth” Gods are worshipped. Two alters are housed just outside the temple: one contains a statue of Guan Yin (the Goddess of Mercy/Compassion that changes his/her form and gives protection and help to those in need. Families without children often pray to him/her). The second alter houses a statue of the God of Fortune. 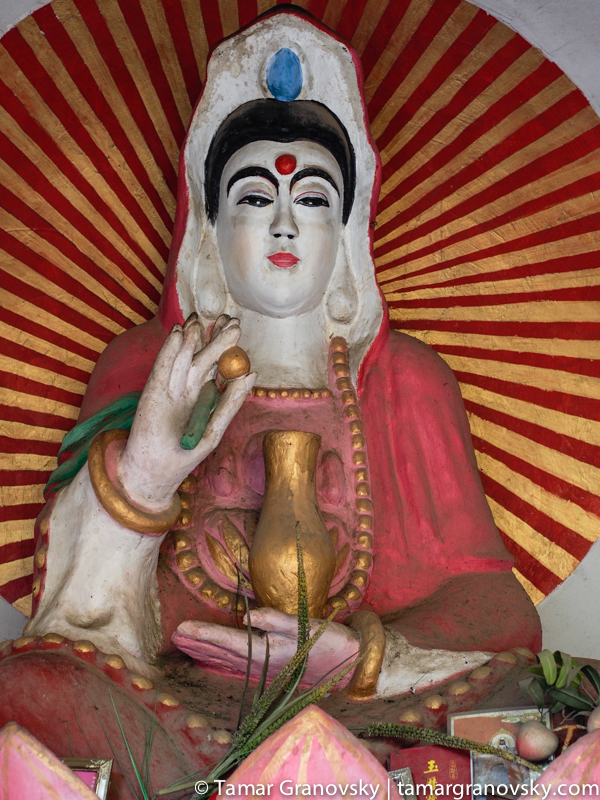 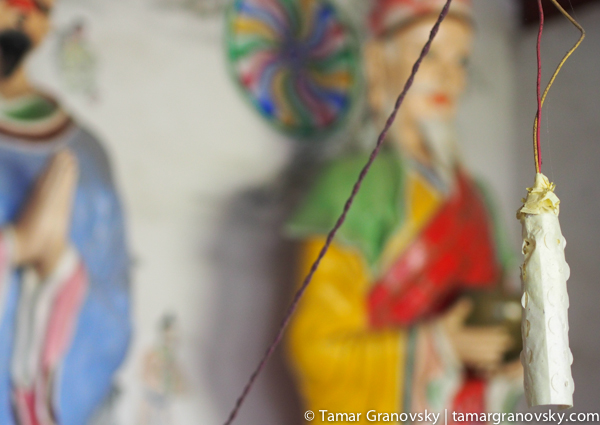 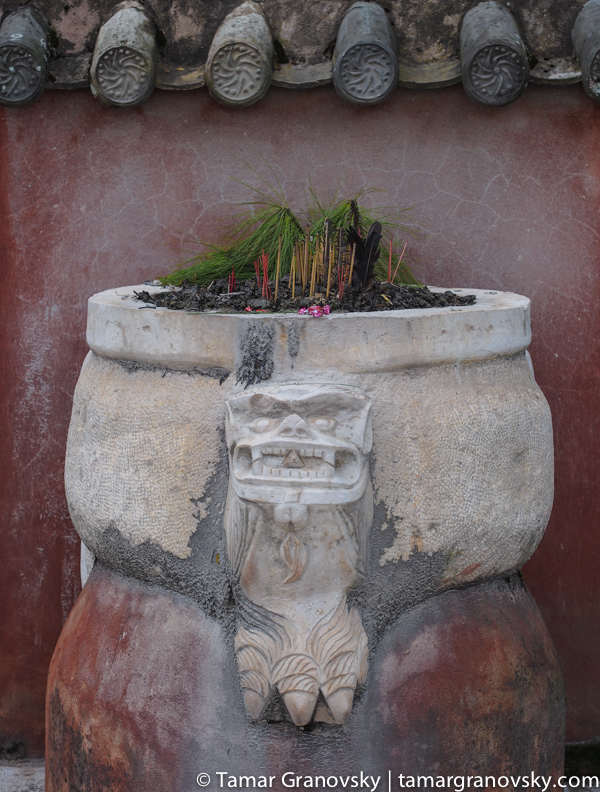 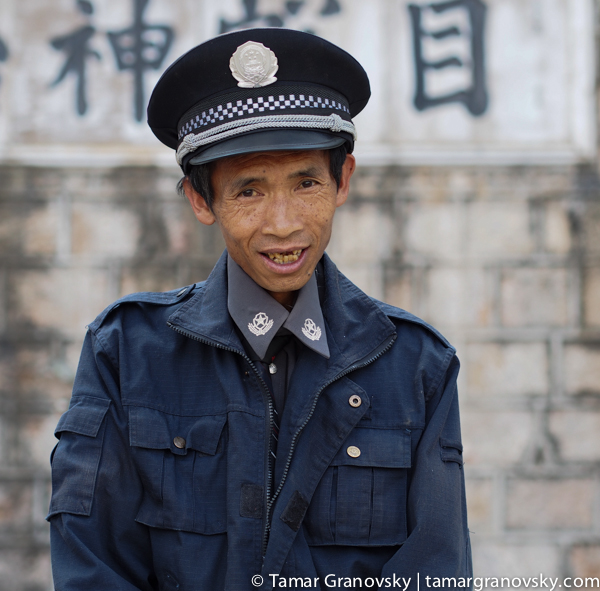 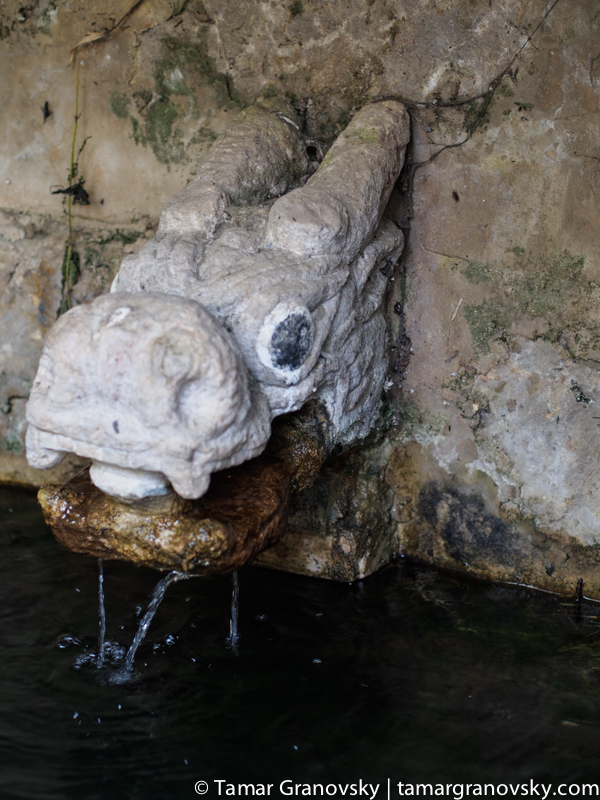 In Tuan Jie Zhen many homes have spells written right on the walls/entrances as well as others written on paper and pasted up. Animal hooves and bones that are meant to offer protection can be seen hanging on the doors; cacti on the roofs serve a similar purpose. Additionally, the doors are decorated with mirrors, which are also meant to ward off the devil. As a common tradition in China, a lucky character “Fu” (which means good fortune, happiness, luck, and richness) is hung upside down on the doors of people’s homes. The character is upside down to mean “fu dao” which translates to “this fu is upside down” (literally). This is actually a play on words since the pronunciation for “fu dao le” is the same as another word with a different meaning and written in different characters – a word which means “arrived.” As a result “fu dao” suggests that fortune and good luck have arrived.

That night was quiet; Bogi and I went out for supper and then returned to our room. We were invited to Rawdon’s for breakfast for the following morning, met a colleague of his from Beijing, wandered the local market, had lunch, and returned to Kunming.

Acknowledgement: I wish to thank Bogi and Rawdon for helping me remember details for this blog entry.